The Concubine by Norah Lofts (review and giveaway) 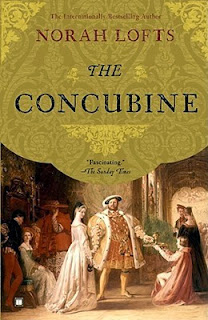 Acclaimed and beloved historical novelist Norah Lofts brings to life the danger, romance, and intrigue of the Tudor court that forever altered the course of English history.

The king first noticed Anne Boleyn as a heartbroken sixteen-year-old, sullen and beautiful after a thwarted romance with the son of the Earl of Northumberland. "All eyes and hair," a courtier had said disparagingly of her, but when King Henry VIII fell for young Anne, nothing could keep him from what he desired. Against common sense and the urgings of his most trusted advisors, Henry defied all, blindly following his passion for Anne, using the power he held over the bodies and souls of all who reside in his realm and beyond. Anne's ascent to the throne elevates her from lady-in-waiting to the highest position a woman could attain, but her life spirals out of control when Henry is driven to desperate acts of betrayal and violence. The consequences of Anne's rise to power and eventual demise are felt well beyond the inner circle of the court. Loyalties, to church, to queen, to country, are tested, and — in the wake of the king's volatile passions — can be an unpredictable matter of life and death.

First published in 1963 and adored by readers for generations, Lofts' lush and moving portrayal of the ambitious and doomed Anne Boleyn will continue to reign as a classic retelling of this epic chapter of history vividly brought to life.


I've read enough books about Anne Boleyn, I am so familiar with her story now that I figured anything more would be boring and mundane. Coming up to December I really wanted to clear off my shelves, plus having read Norah Loft's book on Eleanor of Aquitaine I basically thought 'what the heck'.  Audible had the audio version and away I went.

Not a short book, coming in at over 16 hours (or 464 pages long), I dug in.  The reader did a wonderful job, she set a pace that was not too fast or too slow.  Pleasantly surprised and thoroughly drawn into this story, I can honestly say that it is one of my favorites about Anne Boleyn. This book showed a side of Anne that is not written about much.  A side that showed some compassion and feeling, I found myself routing for her and somehow hoping history had changed.

This book also showed the relationship between Anne and her sister Mary in a sensitive light, which was very believable. This book has a lot going for it and I encourage any Tudor fan to give it a try (I will help you do that too, see below).

Like I stated in my review of Eleanor by Norah Lofts, will definitely be reading more of her books.

Somehow I ended up with 2 copies of this book, so I am offering a paperback edition to one lucky reader.
Open international, ending on January 10th at midnight.


a Rafflecopter giveaway
Posted by Mrs Cook at 8:49 PM