you think you know the story of Rapunzel... 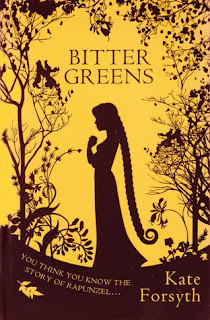 An utterly captivating reinvention of the Rapunzel fairytale weaved together with the scandalous life of one of the tale's first tellers, Charlotte-Rose de la Force.

Charlotte-Rose de la Force has been banished from the court of Versailles by the Sun King, Louis XIV, after a series of scandalous love affairs. She is comforted by an old nun, Sœur Seraphina, who tells her the tale of a young girl who, a hundred years earlier, is sold by her parents for a handful of bitter greens...

Selena is the famous red-haired muse of the artist Tiziano, first painted by him in 1512 and still inspiring him at the time of his death, sixty-four years later. Called La Strega Bella, Selena is at the centre of Renaissance life in Venice, a world of beauty and danger, seduction and betrayal, love and superstition, retaining her youth and beauty by the blood of young red-haired girls.

After Margherita's father steals a handful of parsley, wintercress and rapunzel from the walled garden of the courtesan Selena Leonelli, he is threatened with having both hands cut off unless he and his wife give away their little red-haired girl. And so, when she turns seven, Margherita is locked away in a tower, her hair woven together with the locks of all the girls before her, growing to womanhood under the shadow of La Strega Bella, and dreaming of being rescued...

What more can I  say about this book (that isn't mentioned above).  Bitter Greens partly historical fiction set in 17th century France, also historical fantasy and a retelling of the Rapunzel fairy tale. The cover sold me on the book and what a book it was.  The very first sentence grabbed me and didn't let go, what a ride it was!


“I had always been a great talker and teller of tales.

'You should put a lock on that tongue of yours. It's long enough and sharp enough to slit your own throat,' our guardian warned me, the night before I left home to go to the royal court at Versailles ... I just laughed. 'Don't you know a woman's tongue is her sword? You wouldn't want me to let my only weapon rust, would you?”

It pulled me right in, so many twists and turns that kept my attention through all 491 pages. The story jumps around in time with the lives of these three women, but its done in a way that was not confusing or jumpy.  This is one of those books that made me want to sit and savor it, not rush through but enjoy the experience.
Definitely a must read for historical fiction fans as well as those that love a good fairy tale retelling.

As far as I know it is still not available here in Canada or the US, but can be purchased from The Book Depository (http://www.bookdepository.com/search?searchTerm=bitter+greens&search=Find+book)

Posted by Margaret @ JustOneMoreChapter at 10:01 PM