The Echo Man by Sam Holland 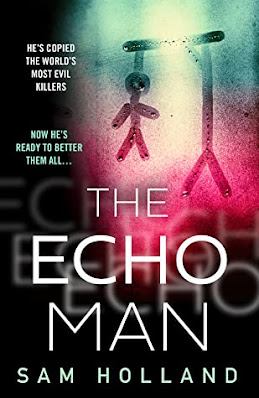 An incredible new thriller from an exciting new talent!

The murders have begun…
Across England, a string of murders is taking place. Each different in method, but each horrifying and brutal.

But the killer is just getting started…
Jess Ambrose is plunged into the investigation when her house is set ablaze. With her husband dead and the police pointing at her, she runs. Her only hope is disgraced detective Nate Griffin, who is convinced Jess is innocent.

And he’s going to shock the world…
Soon, Jess and Griffin discover the unthinkable; this murderer is copying the world’s most notorious serial killers. And now, imitation isn’t enough. The killer dubbed The Echo Man is ready to create his own masterpiece, and it will be more terrifying than anything that has come before…

Paperback, 464 pages
Published April 14th 2022
by HarperCollins
4.5/5 stars
This book was not on my radar until a couple reviews on IG stated how addicting this thriller was.  Were they right?  Yup this book lived up to the hype.  For a debut I am stunned and nervous for the author as she pens her next book, these are mighty fine steps to follow in.
Taking place in England The Echo Man starts off with a bang and doesn't let go till the end.  Jess plays centre stage as does a couple other POVs giving this physiological thriller a well rounded view.  The Echo Man has a flawed cast, twist and turns along with a nice fast pace.  It is dark, bloody and based on true crime.  I will say this isn't for the faint of heart, it is graphic in content and description with a whodunit part that doesn't let go.  The ending wraps up quickly with an explosive conclusion, which for me was good as this old brain can only take so much brutality.
I read it in a couple days, both reading and listening to the audiobook.  Both methods I recommend.
My copy was obtained from my local library and the audiobook via Scribd.

Posted by Margaret @ JustOneMoreChapter at 9:55 PM