Are You Sara? by S.C. Lalli 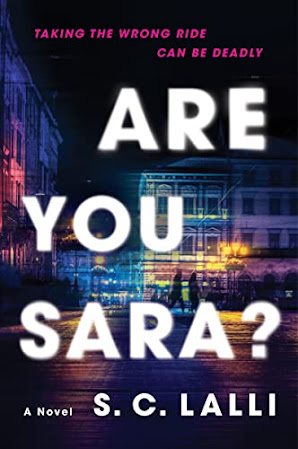 Two women named Sara each get into a rideshare. . . but only one makes it home alive. Which Sara was the real target?

Law student Saraswati “Sara” Bhaduri holds down two jobs in order to make her way through school, but it’s still a struggle. She’s had to do things to pay the bills that most people wouldn’t expect from “a nice Indian girl.” It seems like an ordinary busy Tuesday night at the local dive bar until her boss demands Sara deal with a drunk girl in the bathroom.

The two become fast friends. Why? Because they both have the same name. And despite their different circumstances, the two connect. When they both order rideshares home, they tumble in the back of the cars and head out into the night.

But when Sara awakes in her rideshare, she finds she's on the wrong side of town—the rich side—and she realizes: she and Sarah took the wrong cars home.

With no money, Sara walks back to her apartment on the shady side of town only to discover police lights flashing and a body crumpled on her doorstep: Sarah.

Was Sarah Ellis or Sara Bhaduri the target? And why would anyone want either of them dead?

In this smart, twisty novel about ambition, wealth, and dangerous longing, the layers are peeled back on two young women desperate to break out of the expectations placed on them, with devastating results.
Kindle Edition, 384 pages
Expected publication August 9, 2022
published by Harper Collins CA
3.5/5 stars
When Sara/Sarah get their car ride mixed up, is it a case of mistaken identity or not? Such is the premise of Are You Sara?

This was a dual story line plot, going back in time between the 2 of them. Starting out really strong I was intrigued about the mixup, the mystery and who these 2 vastly different women were.  The story progressed at a slower past and didn't have that unputdown feature I crave in a thriller but curiosity won out with that 'I gotta know what happened here vibe. It definitely went in a direction I didn't anticipate.

Lots of red herrings kept me guessing. Though I wasn't a fan of most of the characters, one was given more time than the other and ultimately the ending worked even if I wasn't a huge fan of it.

All in all a solid debut. My thanks to Harper Collins Ca for a digital arc in exchange for a honest review.

Posted by Margaret @ JustOneMoreChapter at 9:50 AM