Courage, My Love by Kristin Beck 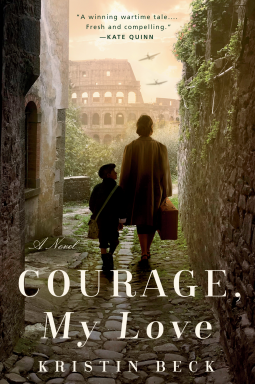 When the Nazi occupation of Rome begins, two courageous young women are plunged deep into the Italian Resistance to fight for their freedom in this captivating debut novel.
Rome, 1943
Lucia Colombo has had her doubts about fascism for years, but as a single mother in an increasingly unstable country, politics are for other people--she needs to focus on keeping herself and her son alive. Then the Italian government falls and the German occupation begins, and suddenly, Lucia finds that complacency is no longer an option.

Francesca Gallo has always been aware of injustice and suffering. A polio survivor who lost her father when he was arrested for his anti-fascist politics, she came to Rome with her fiancé to start a new life. But when the Germans invade and her fiancé is taken by the Nazis, Francesca decides she has only one option: to fight back.

As Lucia and Francesca are pulled deeper into the struggle against the Nazi occupation, both women learn to resist alongside the partisans to drive the Germans from Rome. But as winter sets in, the occupation tightens its grip on the city, and the resistance is in constant danger.

In the darkest days, Francesca and Lucia face their pasts, find the courage to love, and maintain hope for a future that is finally free.
Kindle Edition, 380 pages
Published April 13, 2021
by Berkley
3.5/5 stars
With all the WW2 books on the market it was nice to find one with an Italian setting, there are so many that take place in France, Poland or UK..  It's 1943 and the war is in full bloom.
Dual POV is a favourite of mine, getting to see the story from 2 sides.  Lucia and Francesca did not know each other as the book began and though I they have similar in personalities their narratives brought a nice perspective into the resistance and the role women played.  It was a gripping read, watching as the Italy falls to the Germans.
Courage, My Love is a story of love - between mom and child, love and loss, and the courage to carry on.  It's about duty to country and family and when to say enough is enough. Yes an emotional read and that cover speaks volumes.
This book released last year and available now.
My thanks to Berkley for a digital copy (via Netgalley).
Posted by Margaret @ JustOneMoreChapter at 4:23 PM