Once Upon a Broken Heart by Stephanie Garber 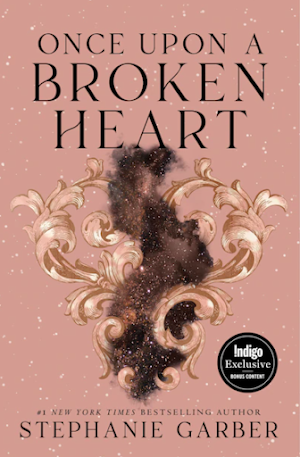 A new series about love, curses, and the lengths that people will go to for happily ever after.

Evangeline Fox was raised in her beloved father’s curiosity shop, where she grew up on legends about immortals, like the tragic Prince of Hearts. She knows his powers are mythic, his kiss is worth dying for, and that bargains with him rarely end well.

But when Evangeline learns that the love of her life is about to marry another, she becomes desperate enough to offer the Prince of Hearts whatever he wants in exchange for his help to stop the wedding. The prince only asks for three kisses. But after Evangeline’s first promised kiss, she learns that the Prince of Hearts wants far more from her than she’s pledged. And he has plans for Evangeline that will either end in the greatest happily ever after, or the most exquisite tragedy…

“She didn't make being alone seem lonely as Evangeline had always feared. She made it seem like an adventure, as if every moment were the start of a story with endless possibilities.”
Once Upon a Broken Heart had me with the title and cover, I'm so glad I followed my gut instinct and pre-ordered to get this exclusive cover.  It far exceeded my expectations and I can't wait for the sequel.
There are a number of things I really enjoyed about this book.  The fairy talish vibes were felt throughout this book and for me it didn't mimic other fairy tales - though others might see similarities, I didn't.  The intricate magic system wasn't hard to follow for this non fantasy reader but rather its detail gave off the ancient vibes of fairy tales of old.
The characters were authentic, unique and so interesting.  I heard there were some familiar faces from the author's previous series (guess who just broke her book buying ban), but that didn't hamper the story, if anything it just made me want to read more Garber books.
"...leaving her alone with a new shipment of oddities that included a fountain pen with a curious label:  For finding dreams that don't exist yet."
The writing style and the plot, with its surprising twists and turns had me enjoying this read.  I didn't rush but savoured the journey. This is a story about lost love, family, secrets and trying to decipher who is trustworthy.  Definitely worth the 5 stars, I can't wait to reread before the sequel comes out in Sept.
This book was part of my 2022 Reading Off My Shelf Challenge (book #9).
Posted by Margaret @ JustOneMoreChapter at 10:30 PM

Email ThisBlogThis!Share to TwitterShare to FacebookShare to Pinterest
Labels: 2022, 2022 Reading off my shelf, Flatiron Books, New to me author, Stephanie Garber, YA, YA Fantasy