Survive the Night by Riley Sager 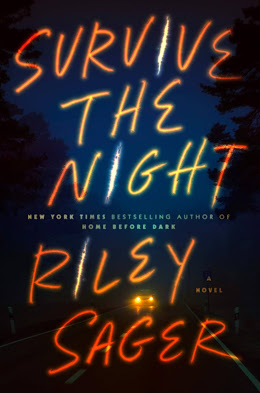 It’s November 1991. George H. W. Bush is in the White House, Nirvana's in the tape deck, and movie-obsessed college student Charlie Jordan is in a car with a man who might be a serial killer.

Josh Baxter, the man behind the wheel, is a virtual stranger to Charlie. They met at the campus ride board, each looking to share the long drive home to Ohio. Both have good reasons for wanting to get away. For Charlie, it’s guilt and grief over the murder of her best friend, who became the third victim of the man known as the Campus Killer. For Josh, it’s to help care for his sick father. Or so he says. Like the Hitchcock heroine she’s named after, Charlie has her doubts. There’s something suspicious about Josh, from the holes in his story about his father to how he doesn’t seem to want Charlie to see inside the car’s trunk. As they travel an empty highway in the dead of night, an increasingly worried Charlie begins to think she’s sharing a car with the Campus Killer. Is Josh truly dangerous? Or is Charlie’s suspicion merely a figment of her movie-fueled imagination?

What follows is a game of cat-and-mouse played out on night-shrouded roads and in neon-lit parking lots, during an age when the only call for help can be made on a pay phone and in a place where there's nowhere to run. In order to win, Charlie must do one thing - survive the night.
Audiobook, 9 hours, 1 minute
Published June 29, 2021 by Penguin Audio
4/5 stars
Riley Sager is one author that I have managed to read all his back list after loving The Last Time I Lied and Home Before Dark.
Image my surprise when Survive the Night was first released that it would end up in my dnf pile.  I just couldn't grasp the scenario of the opening chapters and gave up.  But one not to be defeated too quickly, and after reading a review on Instagram (from bettys_book_club) valid points were made on how to look at this book.  The biggest thing was the era and then to think movies like Scream and Halloween, characters (usually girls) that do the opposite of common sense. You know those girls you scream at on TV telling them to stop and basically hide.  Kinda like Charlie here who gets in a car with a complete stranger after her best friend is murdered...you get the picture, right? Well that worked!
I did end up going the audio book route for my second attempt, and I think between an open mind and great reader I really enjoyed this book.  The reader was Savannah Gilmore, one of my favourites.  The book took off for me, I actually finished in a matter of days which for me these days says something.
There was suspense, suspicion, not a huge cast of characters but enough.  It was mysterious along with a few hiccups along the way.  As in Riley fashion there are twists I didn't see coming but also a couple I figured out.  But all in all a fast paced entertaining listen in a format I highly recommend.
Audiobook was obtained from my local public library via Overdrive.

Posted by Margaret @ JustOneMoreChapter at 8:19 PM