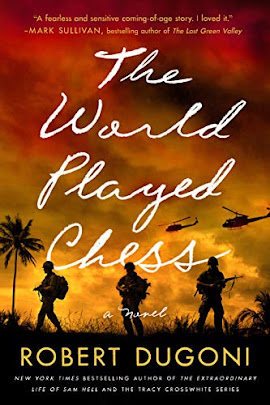 In 1979, Vincent Bianco has just graduated high school. His only desire: collect a little beer money and enjoy his final summer before college. So he lands a job as a laborer on a construction crew. Working alongside two Vietnam vets, one suffering from PTSD, Vincent gets the education of a lifetime.
Now forty years later, with his own son leaving for college, the lessons of that summer—Vincent’s last taste of innocence and first taste of real life—dramatically unfold in a novel about breaking away, shaping a life, and seeking one’s own destiny.


400 pages, Kindle Edition
Expected publication: September 14, 2021
by Lake Union Publishing
3.5/5 stars
"Growing up is a privilege not a right"
I am still a new Robert Dugoni reader, The Extraordinary Life of Sam Hell was my first and an awesome audio read.
The World Played Chess is told from a couple different angles.  Vincent when he is an 18 years old fresh out of high school and then again when he is a dad to an 18 year old.  Much of the story is told from his POV. The other part is through a journal.
I haven't read many books from that era and I can't recall any with Vietnam playing a central part. But I did enjoy the year 1979, it's the same year I graduated high school, it took me down memory lane. The book blurb really doesn't give too much of the story away and I like that, though dealing with Nam I knew it would get emotional and heartbreaking.

Even though I felt the first half of the book rather slow the last part picked up speed with a nice ending. Learning first hand of the experiences in Vietnam was hard to read at times but it was nice to witness the journey Vincent went on through the years. The author notes gave his inspiration for writing this book which reflected a bit of Vincent's life giving more emotion to the story.
Though literary fiction really isn't my thing I enjoyed this one and one of these days I will check out more of Robert Dugoni's books.
My thanks to Lake Union Publishing for a digital ARC (via Netgalley) in exchange for a honest review.

Posted by Margaret @ JustOneMoreChapter at 3:19 PM