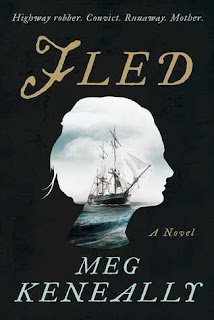 Based on the life of an incredible historical heroine, a harrowing journey in search of love, justice, and freedom, told by the daughter of best-selling author Thomas Keneally (Schindler's List)

Jenny Gwyn has proven herself a survivor. Faced with destitution after the death of her father, she toughens her skin to become a highwaywoman in order to support her impoverished family. But one fatal mistake leads to her arrest, and the king’s justice demands her death. Rather than beg for mercy, Jenny condemns the system that would have her choose between obeying the law and dying, and breaking it for a chance to live. Her ferocity convinces the judge to spare her life, sentencing her and dozens of other convicts to a transport across the world to help settle England's newest colony in Australia.

After being contained on a filthy ship and selling her body for protection, Jenny is horrified to learn that her struggles have only just begun. The harsh landscape of Sydney Cove isn't welcoming to its new settlers with its arid climate and precious little fresh water, and despite the lack of shackles or bars, she and the others are still prisoners under the strict watch of Governor Edward Lockharty, and no amount of cunning can earn his favor. Jenny refuses to submit to the governor or to the barren land unable to support the growing population. Determined to find a better life for herself and her children, she braves the sea, and a journey of over three thousand miles in a small rowboat, for a chance at a future worth fighting for.

Based on the true story of Mary Bryant, an iconic figure in the foundation lore of Australia as Great Britain's penal colony, Fled is a sweeping, heart-wrenching account of one woman's life-long search for freedom.

I love reading about real historical figures that are off the beaten path but should be well known. Figures who defy the odds and lead extraordinary lives. Mary Bryant is one such person and her story is told as one Jenny Trelawney beginning in 1783. Through a series of circumstances, she is sent to the penal colony in Australia. The synopsis above tells so much of what this story entails (maybe a little too much imho) so no need to go over that.

I enjoyed this book, though I was a little familiar with settlements of this nature in Australia it’s always nice to read from different perspectives. This is the author’s debut and her knowledge of the time is evident. Life is hard enough in the late 18th century and harder still when a husband/father dies leaving the family to struggle just to survive.

From Cornwall to Sydney Cove and other places Fled is a journey that tests a woman’s resolve. It’s a story right from the pages of history full of strength, determination, and heartache. The author notes provide detail of what and who are real along with other interesting facts. Fled is a book I recommend especially to those that want some a little different in historical fiction.


I was provided an e-arc from the publisher via Edelweiss in exchange for an honest review.
Posted by Margaret @ JustOneMoreChapter at 10:29 PM