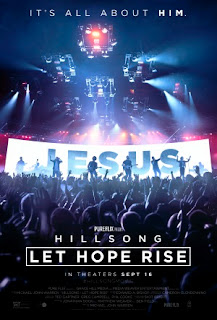 The film explores Hillsong’s humble beginnings and astonishing rise to prominence as an international church whose songs are sung every Sunday by more than 50 million people worldwide.

The runtime for the film is 103 mins.
There are 38 minutes of the following Special Features, included on both the DVD and Blu-ray: · Bonus Performances: “Scandal of Grace”, “Captain”, “Wake”, “The Stand” · Behind the Scenes Footage: LA Record and San Clemente Writing
Release date Dec 20th, 2016

I have listened to the music of Hillsong for years and years, I think even as far back as when they first started up.  I've known they were from Australia but that's about it.  This video is a wonderful look at their beginnings and how they have grown to become the international success so richly deserved.

This DVD highlights the history of the band, from the youth band of the '80's to the highly successful band Hillsong is now.  The process of writing new material and their drive and passion to 'connect the human heart with heaven' was inspiring.  There was also backstage footage showing how this band travels worldwide highlighting some of the interesting places they have been to.  Some might find the excess amount of concert pieces much but I loved it, especially the 'Mighty to Save' piece with it's different languages, locations and cultures.

Let Hope Rise also takes viewers behind the scenes with interviews from its members, showing their homes, family and lifestyle.  While many associate success with financial freedom this 11 member band lives modestly and gives freely to missions.

All in all a great dvd, with high energy you can feel the passion that this group has not just for each other but their calling.

"Movie has been provided courtesy of Pure Flix Entertainment and Graf-Martin Communications, Inc."
Posted by Margaret @ JustOneMoreChapter at 8:14 AM

Email ThisBlogThis!Share to TwitterShare to FacebookShare to Pinterest
Labels: Hillsong