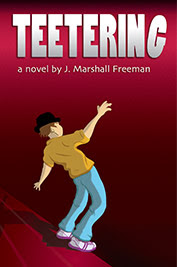 You think you know the world you live in… but you’re wrong!

The life of 15 year-old city kid, Barnabas Bopwright, is turned upside down when he discovers a transit map with a subway line he’s never seen before. The map leads Barnabas deeper and deeper into dangerous secrets that have been closely guarded for over a century.

When he uncovers a terror plot against the city he loves, he is shocked to discover that none of the adults in authority will lift a finger to stop it. Barnabas and his friends realize that if the city is to be saved, if the secrets are to be revealed at last, they must do it themselves.

With character names like Barnabas Bopwright and Maestro Tragidenko, you won’t be surprised at the heavy circus motifs through this thoroughly enjoyable book. It’s a bit on the long side but, odds are you won’t notice that unless you get the hardcopy. The story flows along easily and I was swept up in the fast-paced plot and colourful characters. It’s action-packed, with heists and terror plots and dark tunnels and a wild circus.

Underneath the circus, Teetering is a meaty story about a boy named Barnabas who discovers that his City, a City he thinks he knows well and loves, is built and based on illusions and lies. One of the most engaging themes of the book is Barnabas learning the real workings that prop up the City, and having to deal with the consequences of that knowledge.

Teetering is a difficult book to place on the genre spectrum—and that’s not a bad thing! There are sci-fi and fantasy elements, but most of Teetering’s world seems very much our own. The fantastic element is blended in seamlessly, and when things that are not in the ‘real world’ show up in Teetering, it works very well.

All in all, it’s an exciting read that doesn’t make the 400+ pages seem long. The characters are bright, likeable, and flawed. The plot is engaging and the stakes are high. I recommend it for anyone who enjoys YA set in a deeply created world. It’s the kind of book that stands on its own, but you really hope there’ll be a sequel.

Click here read an excerpt on the author's page.  Also stay tuned for tomorrows post when the author stops by for a visit.
Posted by Margaret @ JustOneMoreChapter at 12:30 AM