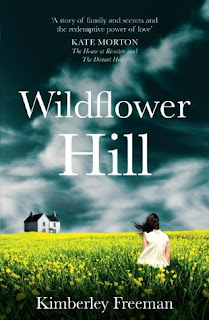 Wildflower Hill is s compelling and romantic novel spanning three generations and half the world, from modern day London to Australia in the 1930s.

Emma is a prima ballerina in London and at a crossroads after an injured knee ruins her career. When she learns of her grandmother Beattie’s death, and her own strange inheritance—an isolated sheep station in rural Australia—Emma is certain she has been saddled with an irritating burden. But when she returns to Australia, forced to rest her body and confront her life, she realizes that she had been using fame as a substitute for love and fulfillment.

Beattie also found herself at a crossroads as a young woman, but she was pregnant and unwed. She eventually found success—but only after following an unconventional path that was often dangerous and heartbreaking. Beattie knew the lessons she learned in life would be important to Emma one day, and she wanted to make sure Emma’s heart remained open to love, no matter what life brought. She knew the magic of the Australian wilderness would show Emma the way.

I have discovered lately that there is a gold mind of Australian authors and have been on a quest the past few few years to find them. Thankfully with Kimberly Freeman her books are easily available worldwide.

Wildflower Hill was an audiobook for me and with dual narratives sometimes that is hard to pull off. The difficulty comes during the transition of time periods and whether the audio can handle the changes in a smooth manner not disrupting the narrative and flow of the story.  In this case there was no issues, with each chapter title paving the way.  As usual for me I am always drawn to the past story but the present day one was just as captivating.

Beattie Blaxland is introduced to us when she was only 19 years old, a young lady with a bright future ahead of her, but that future is dashed when she falls for a married man. Ending up clear across the globe she is forced to rebuild her future, which now includes a daughter. I loved her character I love the way she was portrayed, hard-working, smart and brave enough to take a stand as needed. There are many obstacles she is forced to deal with and it was a great process to watch.

In our present day story we have Emma who is Beattie's granddaughter returning to Australia from England after an injury sidelines her ballerina career. As she begins clearing out her grandmothers personal effects Emma not only discovers who her grandmother really was and the significance of Wildflower Hill but she also learned a lot more about herself and what really matters.

Kimberly Freeman is a wonderful author and I am so glad to have finally read one of her books, which, of course, has resulted in the rest being pushed to the top of my TBR our file. Her writing prose is such that I was drawn into the story right away and had me to caring about the characters and their plight. I was able to visualize so much of the Tasmania countryside and feel the emotional side of this wonderful story.