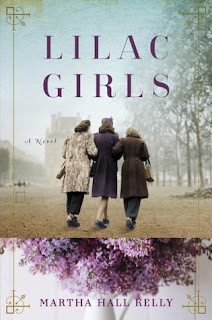 Inspired by the life of a real World War II heroine, this powerful debut novel reveals an incredible story of love, redemption, and terrible secrets that were hidden for decades.

On the eve of a fateful war, New York socialite Caroline Ferriday has her hands full with her post at the French consulate and a new love on the horizon. But Caroline's world is forever changed when Hitler's army invades Poland in September 1939—and then sets its sights on France.

An ocean away from Caroline, Kasia Kuzmerick, a Polish teenager, senses her carefree youth disappearing as she sinks deeper into her role as courier for the underground resistance movement. In a tense atmosphere of watchful eyes and suspect neighbors, one false move can have dire consequences.

For ambitious young German doctor, Herta Oberheuser, an ad for a government medical position seems her ticket out of a desolate life. But, once hired, she finds herself trapped in a male-dominated realm of Nazi secrets and power.

The lives of these three women are set on a collision course when the unthinkable happens and Kasia is sent to Ravensbrück, the notorious female-only Nazi concentration camp. The tragedy and triumph of their stories cross continents—from New York to Paris, and Germany to Poland—capturing the indomitable pull of compassion to bring justice to those whom history has forgotten.

In Lilac Girls, Martha Hall Kelly has crafted a remarkable novel of unsung women and their quest for love, happiness, and second chances. It is a story that will keep readers bonded with the characters, searching for the truth, until the final pages.

I know that I have said this many times in various reviews but I'll say it again.  When reading HF I love to be educated and entertained at the same time.  I've read many books focusing on World War II and the atrocities Hitler and the Nazis inflicted on innocent souls.  Having never heard of Ravensbruck before I wasn't prepared for what I read in this book at all and it wasn't until I read the author's notes that this had actually occurred.  At times it was hard to take in, but we are talking about WW II here.

As you can read above Caroline, Herta and Kasia are the 3 women this story revolves around.  The author has woven an intricate story, there were times I wondering what the connection this women would have and it was great to see the direction this story went.  Beginning in 1939 and continuing through to 1957 it isn't always that we stay with characters this long after the war has ended and that was a nice change.  Even when the war ended it didn't end (emotionally) for everyone.


"we were like flies stuck in honey, alive but not really living."

This is a story of survival and courage, of heartache and secrets, of not knowing and left wondering, it pulls at the heartstrings and a reminder of this horrible period in history.

This is the author debuts and she did a great job, with her meticulous research and layered plot I will definitely be on the lookout for more in the future.  The author's notes were wonderful and very much appreciated, great details and I loved reading about her trips to locations mentioned in Lilac Girls.  It was quite obvious she had a story to tell and was passionate about it.

Thank you to Random House for reaching out and providing a complimentary copy (via netgalley) for review.
Posted by Margaret @ JustOneMoreChapter at 2:18 PM