I am thrilled to be part of this blitz for the Graham Saga by Anna Belfrage, it is one of my very favorite series out there. 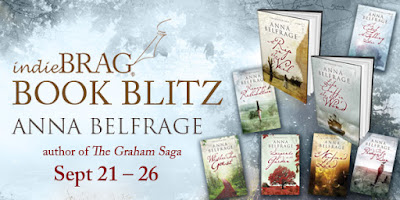 About the Graham Saga


In Revenge and Retribution, Alex has seen her son, Samuel, carried away by the Susquehannock Indians, led by Qaachow. In the below, she is sitting with another of her sons, David, when on the other shore of the river she sees something…

They lapsed into a comfortable silence, watching as the sun transformed the frosted trees into prisms of magical colour. It was very quiet, the migrating birds long gone, and the remaining sparrows and thrushes keeping low to the ground, or at least going about their business without expending energy on making noise. A crow cawed, it cawed again, and then it was all absolute stillness.
David shifted closer to her. The frost on the log had melted under her, dampening her skirts, but she was reluctant to move, and so, apparently, was he. There was a far-off rustling, and the crow called again. The shrubs on the other side of the river parted; a group of men stepped out on the further shore.
“Indians!” David breathed.
“Samuel,” Alex groaned simultaneously, and now she was on her feet, because he was there, her son, standing only fifty feet from her, side by side with Qaachow. Oh God, my boy, he’s brought my boy home, she thought, and her arms went out in an embracing gesture. Samuel took a tentative step in her direction, but Qaachow said something to him, and he ducked his head and stepped back into the forest.
“No!” Alex was already wading through the shallows, ignoring the iciness of the water. “No! Goddamn you, Qaachow! Give me my boy back!” Her eyes burnt into the Indian chief, but he didn’t reply, gesturing to his men to deposit the sorry bundle they were carrying by the water’s edge. Alex slipped, and had to swim furiously against the ice-cold current.
“Mama!” David was shrieking in fear behind her, but Alex didn’t care. She was going after her boy; she had to fetch him home. She slipped again, and the waters closed over her head. Jesus! It was cold!
She resurfaced, spitting like a drowning cat. Samuel was rushing towards the water, and before he could be stopped, he had thrown himself in, buckskins and all, to come to her aid.
“Samuel! Oh God, Samuel! Get back, son.” Alex had her head over the water, wiping at her hair with an arm that was unbearably heavy. Her fingers, she couldn’t feel her fingers. But her eyes locked into Samuel’s, and she smiled. Down she went again, her mouth filling with water. A weak kick, and her head broke the surface.
“I love you, Samuel,” she gargled, before being tugged under by the current, and once again she heard David’s frantic ‘Mama’ from somewhere behind her. But she was almost there, only yards separated her from her son, and then there were arms around Samuel and he was being carried away.
“Mama!” he screamed. “Mama!”
Alex sank, her legs useless in the cold. Other hands took hold of her, and she was half carried, half dragged to lie panting and shivering on the shore. By her nose were a pair of moccasins, and, following them up, she found the legs, the torso and then, finally, the face of Qaachow.
“My son,” she croaked. “I want my son back. You’ve had him long enough, and I die, you hear. Every day without him, I die!”
“A year,” Qaachow reminded her, backing away.
“Curse you, Qaachow!” Alex managed to get up on her knees. “May your seed fail; may your children and grandchildren wither and die; may your people fall into sickness and suffer iniquity and pain. All of this until my son is returned to me.”
Qaachow looked completely taken aback, staring at her with something like fear in his eyes. She rose, tried to wipe her face free of the tendrils of hair that were plastered across it. From the forest came Samuel’s voice, calling for her, for his brothers, his da. Out of the corner of her eye, she could see the other shore where Matthew was standing surrounded by their sons, Jacob already stripping off his clothes.
“I love you, Samuel!” she bellowed. “I love you, son, you hear?”
“Mama!” he yelled back, and then there was the distinctive sound of a slap. Alex stumbled towards the sound, but was rudely shoved to land on the ground. Before she had managed to get back on her feet, the Indians were gone.
“Mama?” Jacob materialised by her side. “We have to get you across and inside.” Alex was shivering so hard she could barely walk, but followed him, dazed and obedient, to the water’s edge.
“They left something,” she mumbled through a mouth too stiff to talk properly with.
“Aye,” Jacob answered. “Mark and John are taking care of it.” Alex inhaled loudly when she re-entered the water. This cold? The current curled itself round her legs, but she managed to keep her footing a good way out, and Jacob was there to help her. Somehow, she was back on their side where Matthew swept her into a cloak and led her back home, David tagging after.
“I saw him,” she said. “Our boy, Matthew. I saw him, and he was tall and strong.” And then she burst into tears. 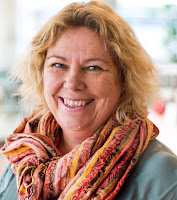 Had Anna been allowed to choose, she’d have become a professional time-traveller. As such a profession does as yet not exists, she settled for second best and became a financial professional with two absorbing interests, namely history and writing. These days, Anna combines an exciting day-job with a large family and her writing endeavours.
When Anna fell in love with her future husband, she got Scotland as an extra, not because her husband is Scottish or has a predilection for kilts, but because his family fled Scotland due to religious persecution in the 17th century – and were related to the Stuarts. For a history buff like Anna, these little details made Future Husband all the more desirable, and sparked a permanent interest in the Scottish Covenanters, which is how Matthew Graham, protagonist of the acclaimed The Graham Saga, began to take shape.
Set in 17th century Scotland and Virginia/Maryland, the series tells the story of Matthew and Alex, two people who should never have met – not when she was born three hundred years after him. With this heady blend of romance, adventure, high drama and historical accuracy, Anna hopes to entertain and captivate, and is more than thrilled when readers tell her just how much they love her books and her characters.
Presently, Anna is hard at work with her next project, a series set in the 1320s featuring Adam de Guirande, his wife Kit, and their adventures and misfortunes in connection with Roger Mortimer’s rise to power. The King’s Greatest Enemy is a series where passion and drama play out against a complex political situation, where today’s traitor may be tomorrow’s hero, and the Wheel of Life never stops rolling.

The first instalment in the Adam and Kit story, In the Shadow of the Storm, will be published in the autumn of 2015.
Other than on her website, Anna can mostly be found on her blog – unless, of course, she is submerged in writing her next novel.
Author Links:
Website
Twitter
Facebook
Amazon
Book Giveaway & Tour Schedule. 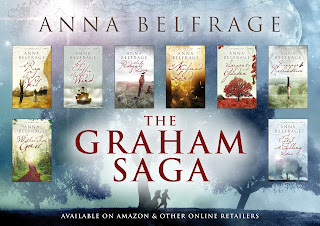