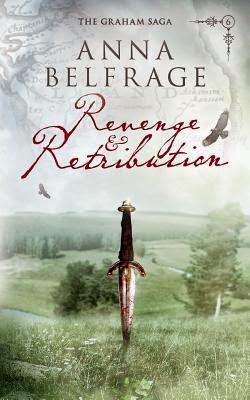 Life in the Colony of Maryland is no sinecure – as Alex and Matthew Graham well know. But nothing in their previous life has prepared them for the mayhem that is about to be unleashed upon them.
Being labelled a witch is not a good thing in 1684, so it is no wonder Alex Graham is aghast at having such insinuations thrown at her. Even worse, it’s Matthew’s brother-in-law, Simon Melville, who points finger at her.

Not that the ensuing hearing is her main concern, because nowadays Alex’s entire life is tainted by the fear of what Philip Burley will do to them once he gets hold of them – there is no longer any ‘if’ about it. On a sunny May afternoon, it seems Philip Burley will at last revenge himself on Matthew for every single perceived wrong. Over the course of twenty-four hours, Alex’s life – and that of her family’s – is permanently changed.

As if all this wasn’t enough, Alex also has to cope with the loss of one of her sons. Forcibly adopted by the former Susquehannock, Samuel is dragged from Alex’s arms to begin a new life in the wilderness.
How is Alex to survive all this? And will she be able to put her damaged family back together?

The Graham's are back! Oh how I have missed you guys.  Book 6 in this series and I will let you in on a little fact here, I didn't start at the beginning with this series, I joined in at book 3 and have loved every minute of it.   So don't let the fact that this is book 6 scare you, but be warned you will want to read the whole series.

Here is a family that has been through so much, they've moved across the ocean to a wilderness civilization and have dealt with so much.  Things happen in this book, bad things.  If you want a real authentic family, one that suffers their share of heartaches and pain, a family that laughs and plays together, a family that sticks together through thick and thin then this family is for you.

I am not giving anything away, its says right there in the synopsis about a permanent change.  Some might think 'why', how could the author do this?  Me, I wasn't surprised, it was bound to happen and given the story lines it had to happen otherwise this series would lose its authenticity.  Let me tell you, I finished the last 1/3 of this book in one sitting.  And I didn't even read the preview chapter for the next book for fear of it gnawing at me till November.

Anna Balfrage is a powerful author, her words bring this story to life. I have a wonderful picture of Graham Gardens in my head, the stream, fields and the cemetery.  Anna has a way of drawing the reader into her books with characters that are genuine and have depth. Alex is a force to be reckoned with, coming from the 21st century and thrown back in time she has adapted well with her husband Matthew. Their love is genuine, but their marriage is not without hurtles, many of them taking place in Revenge & Retribution.

I must read for fans of historical fiction set in early American.

Book One: A Rip in the Veil
Book Two: Like Chaff in the Wind
Book Three: The Prodigal Son
Book Four: A Newfound Land
Book Five: Serpents in the Garden
Book Six: Revenge & Retribution
Book Seven: Whither Thou Goest
Book Eight: To Catch a Falling Star

I was always going to be a writer – or a historian, preferably both. Instead I ended up with a degree in Business and Finance, with very little time to spare for my most favourite pursuit. Still, one does as one must, and in between juggling a challenging career I raised my four children on a potent combination of invented stories, historical debates and masses of good food and homemade cakes. They seem to thrive … Nowadays I spend most of my spare time at my writing desk. The children are half grown, the house is at times eerily silent and I slip away into my imaginary world, with my imaginary characters. Every now and then the one and only man in my life pops his head in to ensure I’m still there. I like that – just as I like how he makes me laugh so often I’ll probably live to well over a hundred.
I was always going to be a writer. Now I am – I have achieved my dream.

check out more spots on this tour