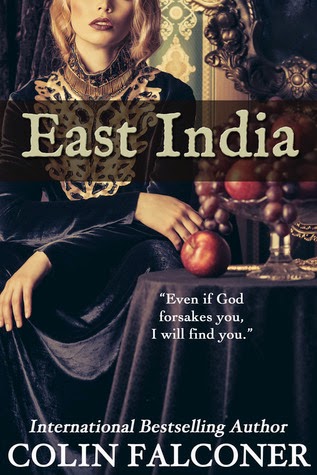 In any other circumstance but shipwreck, rape and murder, a man like Michiel van Texel would never have met a fine lady such as Cornelia Noorstrandt.

He was just a soldier, a sergeant in the Dutch East India company’s army, on his way from Amsterdam to the Indies to fight the Mataram. Such a woman was far above the likes of him.

But both their destinies intertwine far away from Holland, on some god-forsaken islands near the Great Southland. When their great ship, the Utrecht, founders far from home, surviving the Houtman Rocks is the least of their worries.

As they battle to survive and the bravest and the best reveal themselves for what they are, Cornelia’s only hope is a mercenary in a torn coat who shows her that a man is more than just manners and money.

He makes her one promise: ‘Even if God forsakes you, I will find you.’
But can he keep it?

Described by one critic as ‘Jack and Rose in the seventeenth century’, East India will keep you wondering until the final page.

All you wanted, sometimes, was someone to believe in.

Colin Falconer is fast becoming a favorite of mine.  Isabella: Braveheart was what introduced me to Colin Falconer.

The first chapter is enough to grab ones attention, as it takes place in present day, then jumps back to 1629 where the story unfolds.  I have never heard of the shipwreck of the Utrecht which took place off the coast of Australia.  But as soon as I was finished reading I googled what I could to learn more.

Here is a story of total depravity and inhumanity that I could not turn away from.  Rich in detail that had me totally engrossed in this story.  The author has a definite talent for writing scenes that were authentic but not over the top.  I got the picture loud and clear about this wreck.

I will not go into details about the chain of events that lead to this disaster.  But I was say that this is a story of greed, jealousy, lust, murder and total lack of compassion for others (amongst other things too).  There is l a light that does shine with Michiel van Ttexel and his feelings for Cornelia Noorstrandt.  How to find the strength  to carry on when so much is going on around you.

Written with feeling, compassion and well researched this book will appeal to lovers of nautical books, historical fiction and those that just want a really good book to read.

Still, he had learned in battle that you never knew when things would turn; you think it's all over for you, then something turns up to save your skin.  You had to keep going, that was the mark of a man's strength.

Born in London, Colin first trialed as a professional football player in England, and was eventually brought to Australia. He went to Sydney and worked in TV and radio and freelanced for many of Australia’s leading newspapers and magazines. He has published over twenty novels and his work has so far been translated into 23 languages.
He travels regularly to research his novels and his quest for authenticity has led him to run with the bulls in Pamplona, pursue tornadoes across Oklahoma and black witches across Mexico, go cage shark diving in South Africa and get tear gassed in a riot in La Paz.
He currently lives in Barcelona.
For more information please visit Colin Falconer’s website. You can also find him on Facebook or follow on Twitter.

a Rafflecopter giveaway
Posted by Margaret @ JustOneMoreChapter at 7:22 AM