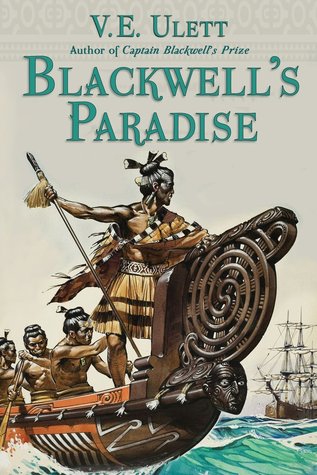 “Not for the faint hearted – Captain Blackwell pulls no punches! Prepare for a right roaring romp in the company of two of the most captivating characters in historical fiction.” – Alaric Bond, author of Turn A Blind Eye, and the Fighting Sail Series A long time resident of California, V.E. Ulett is an avid reader as well as writer of historical fiction.
Proud to be an Old Salt Press author, V.E. is also a member of the National Books Critics Circle and an active member and reviewer for the Historical Novel Society.
As the long war in Europe comes to its conclusion, so does Captain Blackwell’s career in the Royal Navy in BLACKWELLS’ HOMECOMING, a story of the dangers and rewards of desire.
Website
Goodreads
Old Salt Press

To enter to win a copy of Blackwell’s Paradise please complete the Rafflecopter giveaway form below. Giveaway is open to US and Canadian residents only.
Giveaway ends at 11:59pm on April 30th. You must be 18 or older to enter.
Winners will be chosen via Rafflecopter on May 1st and notified via email.
Winners have 48 hours to claim prize or new winner is chosen.