The Family Plot by Megan Collins 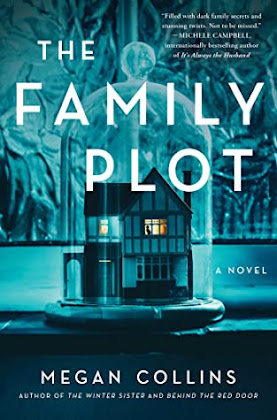 When a family obsessed with true crime gathers to bury their patriarch, horrifying secrets are exposed upon the discovery of another body in his grave in this chilling novel from the author of Behind the Red Door and The Winter Sister .

At twenty-six, Dahlia Lighthouse has a lot to learn when it comes to the real world. Raised in a secluded island mansion deep in the woods and kept isolated by her true crime-obsessed parents, she has spent the last several years living on her own, but unable to move beyond her past—especially the disappearance of her twin brother Andy when they were sixteen.

With her father’s death, Dahlia returns to the house she has avoided for years. But as the rest of the Lighthouse family arrives for the memorial, a gruesome discovery is made: buried in the reserved plot is another body—Andy’s, his skull split open with an ax.

Each member of the family handles the revelation in unusual ways. Her brother Charlie pours his energy into creating a family memorial museum, highlighting their research into the lives of famous murder victims; her sister Tate forges ahead with her popular dioramas portraying crime scenes; and their mother affects a cheerfully domestic façade, becoming unrecognizable as the woman who performed murder reenactments for her children. As Dahlia grapples with her own grief and horror, she realizes that her eccentric family, and the mansion itself, may hold the answers to what happened to her twin.

Kindle Edition, 320 pages
Expected publication: August 17th 2021
by Atria Books
3/5 stars
I'm not really sure what to make of this book.  Right from the beginning that creepy vibe took over as Dahlia tells how she got her name. She was named after the Black Dahlia a murder victim - it was a violent scene and the case still remains unsolved. So explaining that to a 4 year old wasn't the right foot to start of on (imho).
Dahlia is the only POV we get and it would have been nice to hear from some of the other players, there were times I needed a break from Dahlia's repetition. I might add not many were that likeable, except for Ruby I liked her - even if she was rather spooky.
The mystery surrounding the disappearance of her brother Andy and the other things that happened on this island was intriguing, it kept me wondering.  The setting was kinda creepy with the paths, shed and freaky neighbours.  But it was the family dynamics that I struggled with.  Dysfunctional puts it mildly, something was missing to even make this group feel like they were related.  All the pieces didn't fit together smoothly and I was left scratching my head a bunch of times at the ending.
My thanks to Atria Books (via Netgalley) for an advanced digital copy of this book in exchange for an honest review.
Posted by Margaret @ JustOneMoreChapter at 11:19 AM

Email ThisBlogThis!Share to TwitterShare to FacebookShare to Pinterest
Labels: 2021, Megan Collins, Netgalley, New to me author