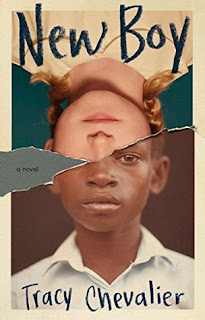 "O felt her presence behind him like a fire at his back.”

Arriving at his fourth school in six years, diplomat’s son Osei Kokote—“O” for short—knows he needs an ally if he is to survive his first day, so he is lucky to hit it off with Dee, the most popular girl in school. But one boy, used to holding sway in the world of the school­yard, can’t stand to witness the budding relationship. When Ian decides to destroy the friendship between the black boy and the golden girl, the school and its key players—teachers and pupils alike—will never be the same again.

The tragedy of Othello is vividly transposed to a 1970s suburban Washington school, where kids fall in and out of love with each other before lunchtime, and practice a casual racism picked up from their parents and teachers. The world of preadolescents is as passionate and intense, if not more so, as that of adults. Drawing us into the lives and emotions of four eleven-year-olds—Osei, Dee, Ian and his reluctant girlfriend Mimi—Tracy Chevalier’s powerful drama of friends torn apart by love and jealousy, bullying and betrayal, is as moving as it is enthralling. It is an unfor­gettable novel.

I knew nothing about this book going in, not about Othello and that it’s part of a series, though each works as a stand-alone. It’s the author that drew me in, I’ve read some of her previous books and liked them.

New Boy takes place in the 1970s during a normal day at school for a group of 10/11-year-olds. But there is nothing normal about it. Again I was treated to great writing, a very fast-moving plot and a look at racism, friendship, and bullying (plus other social issues).  However, my problem with the issues here and the feel of the story were more in line with 16 years old, the strong sexual tensions didn’t match the ages nor the time period.

So for me I struggled with that aspect a lot. Also, the new boy is Osei shortened to O and that distracted me because at times he’d be Osei and other times O, just disrupted my flow.

All in all an interesting and quick read.
Posted by Margaret @ JustOneMoreChapter at 5:39 PM