Review: The Last Year of the War by Susan Meissner 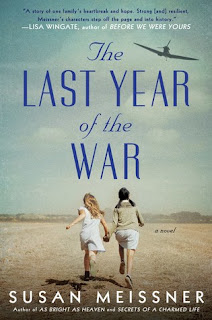 Elise Sontag is a typical Iowa fourteen-year-old in 1943--aware of the war but distanced from its reach. Then her father, a legal U.S. resident for nearly two decades, is suddenly arrested on suspicion of being a Nazi sympathizer. The family is sent to an internment camp in Texas, where, behind the armed guards and barbed wire, Elise feels stripped of everything beloved and familiar, including her own identity.

The only thing that makes the camp bearable is meeting fellow internee Mariko Inoue, a Japanese-American teen from Los Angeles, whose friendship empowers Elise to believe the life she knew before the war will again be hers. Together in the desert wilderness, Elise and Mariko hold tight the dream of being young American women with a future beyond the fences.


As much as I have been trying to steer away from books involving either of the World Wars I somehow end up there. Susan Meissner is a favorite of mine so it stands to reason I’d be grabbing her latest.

One of the things I loved about this one is the educational part. Having heard of interment camps but never fully grasped how they function this was an eye opener for me. Deemed traitors of war these 2 families meet and friendship between the daughters is forged.

Sometimes told in a matter of fact way I still found myself immersed in the story. The amount of research is evident and while some might find it lengthy I found it gave room to get to know Elise as well as feel the affects this war had on her and the family.

With a unique subject The Last Year of the War is a story of friendship, family and searching. Definitely a book and author I recommend.

Posted by Margaret @ JustOneMoreChapter at 11:23 PM