Review and Giveaway (signed copy): The Huntress by Kate Quinn 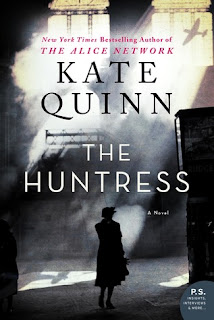 From the author of the New York Times and USA Today bestselling novel, The Alice Network, comes another fascinating historical novel about a battle-haunted English journalist and a Russian female bomber pilot who join forces to track the Huntress, a Nazi war criminal gone to ground in America.

In the aftermath of war, the hunter becomes the hunted…

Bold, reckless Nina Markova grows up on the icy edge of Soviet Russia, dreaming of flight and fearing nothing. When the tide of war sweeps over her homeland, she gambles everything to join the infamous Night Witches, an all-female night bomber regiment wreaking havoc on Hitler’s eastern front. But when she is downed behind enemy lines and thrown across the path of a lethal Nazi murderess known as the Huntress, Nina must use all her wits to survive.

British war correspondent Ian Graham has witnessed the horrors of war from Omaha Beach to the Nuremberg Trials. He abandons journalism after the war to become a Nazi hunter, yet one target eludes him: the Huntress. Fierce, disciplined Ian must join forces with brazen, cocksure Nina, the only witness to escape the Huntress alive. But a shared secret could derail their mission unless Ian and Nina force themselves to confront it.

Seventeen-year-old Jordan McBride grows up in post WWII Boston, determined despite family opposition to become a photographer. At first, delighted when her long-widowed father brings home a fiancée, Jordan grows increasingly disquieted by the soft-spoken German widow who seems to be hiding something. Armed only with her camera and her wits, Jordan delves into her new stepmother’s past and slowly realizes there are mysteries buried deep in her family. But Jordan’s search for the truth may threaten all she holds dear.

I love going into a book blind, from experience I know that a Kate Quinn book is always a treat but will admit being blown away with my experience with The Huntress.

I really didn’t know anything other than that the Night Witches were part of the story. As the different time periods, characters and plots unfolded I found myself mesmerized with the exquisite writing. I was transported and put right in the scenes, felt the emotional situations and really appreciated the author's knowledge of the time periods and it’s history. The characters were deep, complex, and authentic. I smiled with the wit that was mixed in at just the right time, breaking up some of the tension.

This is one of those books where I savored the time I was able to sit and read, to enjoy the ride as only Kate Quinn can deliver on. Not only did The Huntress make my best of 2018 but also one of my all time favorites, definitely can see myself rereading.

I received an ARC from Harper Collins Canada at a Tea they hosted back in September and had the privilege of meeting Kate Quinn (again) along with Jennifer Robson.  Harper Collins graciously gave me a copy to give to one of my lucky readers - and it's signed.  Keep on scrolling down to enter. 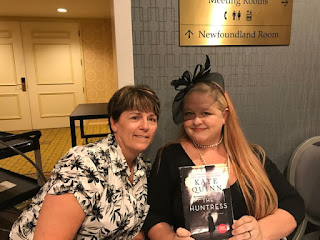 This giveaway is open international, with the understanding that I am mailing from Canada.  If the winner lives in Canada then you already know about the possible delays with Canada Post.  Otherwise, it might be a week or so before I can mail when I pop over to the US to mail.  Good luck!!


a Rafflecopter giveaway
Posted by Margaret @ JustOneMoreChapter at 11:19 PM