Review: A Rose for the Crown by Anne Easter Smith 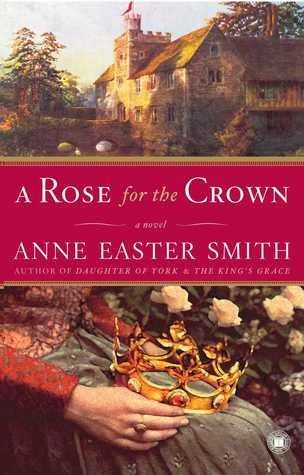 In A Rose for the Crown, we meet one of history's alleged villains through the eyes of a captivating new heroine -- the woman who was the mother of his illegitimate children, a woman who loved him for who he really was, no matter what the cost to herself.

As Kate Haute moves from her peasant roots to the luxurious palaces of England, her path is inextricably intertwined with that of Richard, Duke of Gloucester, later King Richard III. Although they could never marry, their young passion grows into a love that sustains them through war, personal tragedy, and the dangerous heights of political triumph.

Anne Easter Smith's impeccable research provides the backbone of an engrossing and vibrant debut from a major new historical novelist.

Author's Note: We know Richard had a mistress -- perhaps more than one -- because two of his bastard children are mentioned in records from the period. No one has discovered her identity, which has allowed me to invent her. This is her story -- as plausible as a thorough research into the period and lives of the non-fictional characters allowed .

*sign* why has it taken me so long to read this book, or anything by Anne Easter Smith?  I can't think of a good excuse, it's not the size because I love a good thick book.  It's not the presentation because the cover is gorgeous. It's not because I've heard negative things about this book, on the contrary I have heard nothing but good things (and others she has written).  So last week I decided enough already and purchased the audio from audible, loaded up my iPod and went for a walk. Then I walked some more, then I cleaned the house, took the dog for another walk (he thanks you Anne), folded laundry. I did whatever I could so to continue with this story. I was captivated right from the get go.

Kate is only a young girl when introduced, she is spunky and lively but also mature for her age, though I must remind myself that girls grew up faster in the 1400's, there wasn't a lot of time to just be kids.
This book comes in at 672 pages in an over-sized softcover, it is a romance but not done in a harlequin kind of way.   It's historical and the author really knows her stuff and wove this story around actual events which made the story very plausible.

As this author states in her notes, there isn't a lot of information about Kate Haute and this book fills in the gaps that not only humanized her but Richard III as well, it was nice to view him in this light for a change.

Rosalyn Landor is the reader and she is one of my very favorites, her voice matches the time period perfectly and it always a pleasure to listen to.

Posted by Margaret @ JustOneMoreChapter at 10:10 PM