The Summer Queen by Elizabeth Chadwick 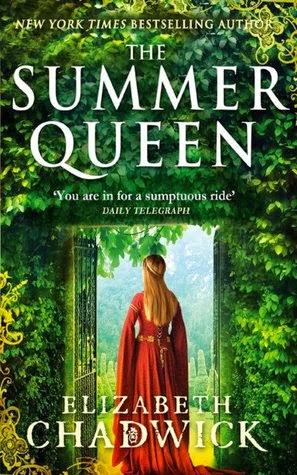 Eleanor of Aquitaine is a 12th century icon who has fascinated readers for 800 years. But the real Eleanor remains elusive.

This stunning novel introduces an Eleanor that all other writers have missed. Based on the most up-to-date research, it is the first novel to show Eleanor beginning her married life at 13. Barely out of childhood, this gives an entirely new slant to how Eleanor is treated bv those around her. She was often the victim and her first marriage was horribly abusive.

Overflowing with scandal, passion, triumph and tragedy, Eleanor's legendary story begins when her beloved father dies in the summer of 1137, and she is made to marry the young prince Louis of France. A week after the marriage she becomes a queen and her life will change beyond recognition . . .

Ever since reading Skaron Kay Penman's Plantagenets series I have been fascinated with Eleanor of Aquitaine.  So it was just a given  when I heard about this book that it was a 'must read'.  The first in a planned trilogy, beginning when Alienor (that is how she is referred to in this book), is just 13 years old.

There are times when I anxiously await a new release that I have such high hopes and expectations which causes let down and disappointment when I finally read it.  This was not the case with here, I LOVED THIS BOOK!  I did not rush through this book, but sat back and thoroughly enjoyed the journey.

Elizabeth Chadwick has written a wonderful story on the early life of Alienor, but not just Alienor,  also her sister, Petronella,  King Louis, young Henry and so many more. Starting at age 13 one can't help bonding and cheer for this young girl (we know girls of that age have no say in their lives) as she grows up along side King Louis.

"She had married a young man, never realizing he would become this warped semblance of a monk"

"Though supposedly a grown man and an anoited king, he was so childish and naive that she despaired of him"


This book was well researched and written is such a way that one could smell the flowers, visualize the clothing and feel the lumps and bumps on the journey to Jerusalem.  The book ended in a perfect place where Alienor begins a new phase of her life. I can't wait for book 2!

I highly recommend this book to those your love historical fiction and getting lost in a book.

The Eleanor of Aquitaine Trilogy

The titles in this forthcoming series will be as follows:

Posted by Margaret @ JustOneMoreChapter at 10:59 AM